Last week, at the London Real Estate forum (LREF), one of the hot topics was Slough. The town is normally talked about in derogatory terms and has struggled to shake off its association with John Betjeman’s poem ‘Slough’ (‘come friendly bombs’, etc) and the TV sitcom series The Office, but at LREF Slough was being taken seriously.

“Don’t you think the Thames Valley is going to eat your breakfast?” someone from the audience asked representatives of west London boroughs during a panel discussion titled ‘West London: collaboration and the commercial story’. “More specifically,” he continued: “Are you worried about Slough?”

With impeccable timing, the day after the panel, U+I and AshbyCapital officially launched The Future Works, the first phase completed of a three-office-building speculative development next to Slough train station.

The development is the latest evidence of regeneration in a town undergoing something of a renaissance at the moment, with British Airways just this week rumoured to be scoping the location for a potential new HQ.

Property Week visited the building just before it completed to catch up with Simon Hesketh from U+I and Peter Ferrari from AshbyCapital and find out whether their west London competitors really should be worried.

From Slough railway station, The Future Works is not visible. It is only as you walk down Brunel Way that the 100,000 sq ft glass behemoth hoves into view, presenting a sight that would be impressive in central London, never mind Slough where few buildings of this quality or scale have been built.

“What U+I has delivered here is West End quality,” proclaims Ferrari, the founder and chief executive of AshbyCapital. “We are 32 minutes from Bond Street on Crossrail. It’s a game changer for Slough. This is a £60m investment. The whole lot for us will be circa £200m, which we will roll out with U+I over the coming years.”

The industry veteran, who used to be managing director of Heron International, claims he does not miss being a developer. “I have been a developer for 30 years, but now I’m a retired developer,” he says. “I leave others, such as Simon, who I have known for just 20 years, to do the great work.”

Hesketh, director of regeneration at U+I, is equally effusive about Ferrari. “We’ve found a great partner in AshbyCapital,” he says. 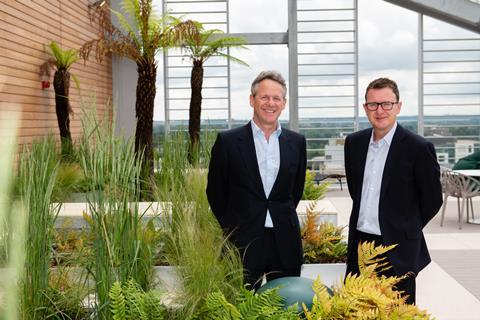 U+I has owned the site, which sits next to Slough’s new bus station, for a number of years and brought it forward as part of the council’s Heart of Slough regeneration programme.

The Future Works is the first of three buildings that will together deliver between 300,000 sq ft and 350,000 sq ft. Hesketh says that the council selected U+I because of its track record as developer and masterplanner. U+I,meanwhile, was impressed with the council’s attitude.

“We liked Slough because we could see how ambitious the council was and we could see that the town was undervalued,” he says. “When you look at the number of organisations that have their UK, European or even global headquarters here, it is second only to London.”

Yet it did not have good-quality, town-centre office space. Most of the existing office stock was located out at SEGRO’s trading estate, just outside the centre. Over the past five years, however, the situation has started to change.

Triggered by the council’s regeneration programme, three major developments have been built in the town centre, offering more than 300,000 sq ft of prime grade-A office space between them: The Porter Building, which was developed by Landid/Brockton (120,000 sq ft); LRE Capital and XLB Property’s 25 Windsor Road (111,000 sq ft); and The Future Works.

The first two buildings, both recently completed, let quickly, with the council announcing earlier this month that it intends to move its offices and 1,200 staff into 25 Windsor Road.

“The council’s decision to move back into the town centre – they’re just on the edges of the town now – is good news for Slough,” says Ferrari. “But it’s also very good for us as it means that we are the only building left available.”

The partnership secured its first tenant for The Future Works last April, pre-letting around 17,000 sq ft across the ground and first floors to serviced office and co-working provider Central Working. The hub, the 10th across the UK for the company, will offer space for 350 workers.

“They are a great asset for us to have, with very high-quality product,” says Ferrari. “We’ve interviewed lots of operators and picked them for the engagement they have with local communities. We think this building will play a great role in this area.”

Hesketh adds that the co-working provider “is the only business that I know of that offers its members a money-back guarantee”, which he quips “is slightly better than just getting a free beer”.

Central Working will also run the large communal terrace on the roof of the eight-storey building, which will be accessible to all the building’s employees.

“They’ll do yoga classes, cocktail-making sessions – you name it, they’ll be doing it,” says Ferrari. “This will bring the building alive. As beautiful as Slough is, when you are in this building you’ll have your own environment.”

The new office scheme, which is situated close to Slough train station

Meanwhile, the ground floor will feature a café that is currently under construction. At its entrance, a large mural portrays the area surrounding the Thames Valley town. “It really puts Slough into context,” says Ferrari.

“We are in the middle of an amazing area. You’ve got golf clubs, Windsor Great Park, the river with great pubs and restaurants, Legoland. There’s a hell of a lot going on around here.”

Having all these amenities on Slough’s doorstep will help businesses hire – and retain – employees, Ferrari believes. “You’ve got to provide that angle. This is such a great place to be; it not only has the great connectivity with the M4, the M25 and Crossrail, but we are in one of the most beautiful areas of England.”

The terrace areas offer a good view of the whole The Future Works site, which when developed out will feature three buildings reminiscent of an Olympic ski jump.

Pointing at a large square plot of land directly in front of the terrace, he says: “That’s phase three. We’ll do an 80,000 sq ft building there and on the other side will stand the largest and tallest one – phase two, a 170,000 sq ft tower.”

It is an ambitious development to undertake – particularly on a speculative basis. Ferrari acknowledges that it is something of a gamble. “It’s very difficult to make viable developments,” he says. “It’s difficult to find the right sites; building costs are high and it’s hard to find the right partner. It’s a bit of a leap of faith. There is always a certain amount of risk involved, but that’s also the reason we were extremely selective. It has to tick all the boxes. Scheme, location and supply – all need to be perfect.”

It can also be difficult to secure funding for spec development of this scale, notes Hesketh. “The trick is to find the right capital partner who believes in your vision, and of course to target local authorities that are proactive in this sense. Slough Borough Council is definitely open for business: they are fulfilling on their promise to completely transform the town, taking advantage of a once-in-a-generation opportunity.”

That transformation is still ongoing. From the rooftop of The Future Works you can see a number of empty sites that will be developed in the near future. The largest of these is the former home of Thames Valley University (TVU). In April last year, the council announced plans to build a huge mixed-use scheme on the site consisting of 1,400 homes, 250,000 sq ft of office space and 45,000 sq ft of retail, at an estimated cost of £550m.

The town’s other large redevelopment site, the Queensmere shopping centre, was bought by the Abu Dhabi Investment Authority (ADIA) for £130m in 2016. A masterplan is due to be announced within the next few months, but rumours are that ADIA is planning a massive mega-centre ‘à la Westfield’.

“It’s amazing how quickly a place can change when the shopping is sorted out,” says Hesketh, alluding to Croydon’s Westfield and other similar examples in the South East.

“We see Slough as a second Croydon, really,” he adds. “It has always been an important commercial centre, it never really won any awards for its beauty and architecture, but it’s absolutely having a renaissance now.”

The development partners have already received planning consent for phase two and Hesketh is committed to pushing ahead with construction as soon as possible. “We’ll build that and we will build it quickly, because we’ve already done most of the groundwork. The structure has been laid with the basement of phase one,” says Hesketh.

Ferrari adds that this will enable it to respond to demand for larger requirements, if need be. “It gives us some options,” he says, adding that AshbyCapital prefers investing in multi-let buildings to diversify its income stream.

The duo are confident that the first building will let quickly enough for them to focus on the next phases. “We always expected to let it after completion,” says Hesketh. “Slough town centre is not really known as a pre-let market.”

“We are in a dream situation. We look forward to seeing what the town will look like in the future”

Ferrari is confident that once they get momentum in terms of lettings, phases two and three will receive more pre-let interest from potential occupiers. “We obviously have the financials and the delivery skills available.”

They also hope to emulate the letting success of The Porter Building, which launched in Autumn last year and is located next to The Future Works.

“That’s great and it sets the tone for this building,” says Ferrari. “Really, we are in a dream situation. We look forward to seeing what the town will look like in the future.”

So should west London be worried about the threat posed by Slough? With schemes like The Future Works and the other developments starting to attract new tenants to the town centre – and encourage old ones to return – Slough is certainly shedding its negative reputation.

Perhaps it’s not surprising that Julian Bell, leader of Ealing council, was reluctant to answer that audience question head-on at last week’s LREF debate. “Well I think there are challenges ahead… What I can say is that we are now in an extremely competitive market,” he said.

If the Future Works development is anything to go by, more and more of that competition is going to come from Slough.